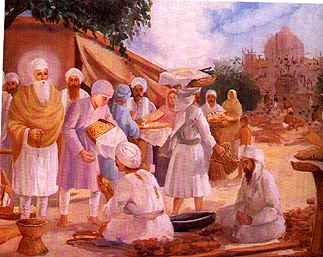 The early history of Guru Ram Das is referred to in the previous chapter. Many writers have expressed their opinion that Akbar granted the land only to Guru Ram Das on which he founded the city of Ramdaspur (later known as Amritsar), and so they contend that the city of Amritsar was not founded during the time of Guru Amar Das. It is also a well-known fact of Sikh history that Emperor Akbar came to Goindwal and he dined with the common people in the Guru's langar before he could see the Guru. It seems that the Emperor granted the estate in the name of Bibi Bhani at that time, and Jethaji being her husband, was made incharge of the estate by Guru Amar Das. Guru Nanak awarded the Guruship to Bhai Lehna and not to his sons, and it is quite obvious that in order to avoid hostility of his sons towards his successor, he asked Guru Angad to move to Khadur instead of continuing to live in Kartarpur. The same circumstances prevailed during the reign of second and third Gurus. It is, therefore, quite likely that the planning of a new city was called for during the reign of Guru Amar Das as mentioned in the previous part.

Guru Ram Das left Goindwal for his new colony. Many Sikhs followed the Guru and settled there. At first this city was called Ramdaspur, which is now called Amritsar. A revenue collector of Patti in district of Lahore had five daughters, the fifth daughter was very religious. One day the father asked who gave them to eat and drink. The first four daughters said that it were their parents who had provided them with food and other necessities of life, but the fifth daughter told her parents that God was the only Cherisher of His creation. On hearing this reply her father got very angry and remarked,I shall see if God will protect you. One day a crippled leper came to the town and the father married his fifth daughter to him to teach her a lesson. She willfully accepted him as her true husband. She put him in a basket and carried him on her head, and begged from door to door to maintain their livelihood. One day she left him under a tree near a pool of water and went to the nearby colony to beg for food. The leper saw some crows (black in color) dipping in the water and they turned white when came out of the water. The leper thought that the water had some miraculous healing property. So he left his basket and crawled into the water, and lo, the leprosy at once disappeared from the body except one finger which was left out of water. When the lady came back, she did not believe the story of the healed leper. Ultimately they went to Guru Ram Das, who confirmed saying that the pool possesseth such extraordinary efficacy which the man alleged. Upon this the couple became Guru's followers and they worked in the excavation of the tank later on. The tree under the shade of which she left her husband, is still standing there and is called 'Dukhbhanjni Beri'. The pool was known as Amritsar- tank of nectar, the place itself came to be known as the city of Amritsar. The work was not finished by Guru Ram Das but it was completed by his successor, Guru Arjan Dev. 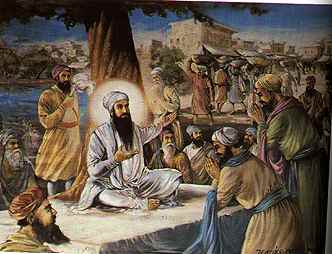 Baba Srichand, the eldest son of Guru Nanak, had founded a religious sect of his own known as Udasis. He visited Amritsar and came to see Guru Ram Das. On seeing Guru's long flowing beard, Baba Srichand asked him jocularly why he grew it that long. The Guru replied,To wipe the dust from the holy feet of the saints like you. 'Your this sweet humility is the magic that makes you so great and makes me feel so small,' replied Srichand. Baba Srichand promised the Guru his co-operation. After that the Udasis spared no pains to serve Sikh eligion. It is said that after the death of Banda Bahadur, when the Mughal rulers decided to root out Sikh religion, it was the Udasis who kept the Divine spark of the Sikh faith alight.

Like his predecessors, Guru Ram Das carried on the work of Langar in a more elaborate and methodical way. As in the past strict adherence was made to the term 'Pangat' in Langar. Anybody irrespective of race, caste, creed, religion or sex, could partake of food without any hesitation. The caste system and pilgrimages were decried and superstitions were denounced.

Guru Ram Das composed a hymn known as 'Lawan' in Suhi Mohalla 4, page 773 of Guru Granth Sahib, and asked his Sikhs to recite them to solemnize marriages. The Sabad 'Lawan' embodies in itself a lesson for the couple to develop true love for each other. In

reality this Sabad is for a human being to develop love for the divine ridegroom.
The Guru composed the following Sabad to instruct his Sikhs in the practice of their religion:
He who calleth himself a Sikh of the true Guru, should rise early and meditate on God;
He should make an effort early in the morning, bathe in the inner tank of nectar;
Repeat God's Name under Guru's instruction, and all his sins and transgressions shall be erased;
At sunrise he should sing the Guru's hymns, and whether sitting or standing meditate on God's Name;
The disciple who at every breath meditateth on God, will be dear to the Guru; The Guru imparteth
instruction to that disciple to whom my Lord bestows His grace;
The servant Nanak prayeth for the dust of the feet of such a disciple of the Guru who himself repeateth
God's Name and causeth others to do so.
(Gauri Ki Var- Mohalla 4, p-305-6)

Sahari Mal, Guru's cousin from Lahore, invited the Guru to grace his son's marriage. For some reason the Guru could not go, but he asked his eldest son, Prithi Chand to attend the marriage. Prithi Chand refused to go. His refusal is attributed to possibly two motives. It is said that he was incharge of the offerings that were made to the Guru and was able to furtively set aside much wealth for himself. If he had gone to Lahore, this illicit gain might have fallen in somebody else's hands. Secondly he thought that the time was fast approaching for the selection of a person to succeed his father as Guru and so he should remain in Amritsar. Mahadev, the Guru's second son, did not want to go because of his indifference to worldly affairs. The third son, Arjan Dev agreed to attend the marriage. He was instructed to stay on in Lahore after the marriage to look after the affairs of the Sikh Sangat of that place.

After some time he started feeling the pangs of separation for his father and the Guru, and wrote three letters, two of which were intercepted by his elder brother, Prithi Chand. A letter marked '3', reached the Guru and Arjan Dev was immediately recalled from Lahore. On his return he told his father that he had sent three letters. The truth came to light and Prithi Chand was forced to produce the other two letters. Thus Prithi Chand's actions were exposed.

Guru Ram Das embraced Arjan Dev, sent for five paise and a coco-nut, and placed them before him. He descending from his throne, seated him there before the whole assembly of the Sikhs. Bhai Buddha affixed the tilak of spiritual sovereignty to Arjan Dev's forehead, and thus he was proclaimed as Guru Arjan Dev. This appened in August, 1581. Prithi Chand became so mad that he addressed his father in abusive language. He told Bhai Buddha that his father acted improperly in giving Guruship to his younger brother. He vowed that he would remove Guru Arjan and would seat himself on the Guru Gaddi (throne). The Guru counselled him not to quarrel about it, but Prithi Chand refused to submit and adopted an attitude of open defiance.

Having nominated Guru Arjan Dev, Guru Ram Das left for his old headquarters at Goindwal. After a few days He left eft this world on the first of September, 1581.