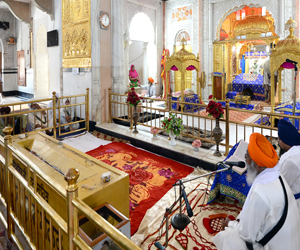 Guru Nanak was born in 1469 at Rai Bhoeki Talwandi now nown as NankanaSahib situated in Punjab province of West Pakistan. This placeis about 55 miles north-west of Lahore. His father, Mehta Kaluwas a Patwari- an accountant of land revenue in the government.Guru's mother was Mata Tripta and he had one older sister, BibiNanki. From the very childhood, Bibi Nanki saw in him the Lightof God but she did not reveal this secret to anyone. She isknown as the first disciple of Guru Nanak.

At the age of seven, Guru Nanak was sent to school, which was run by teacher, Pandit Gopal Das, at his village. As usual the teacher started the lesson with an alphabet but the teacher was wonder-stuck when the Guru asked him to explain the meanings of the letters of the alphabet. However at the helplessness of his teacher, the Guru wrote the meanings of each and every letter of the alphabet. This was the first Divine Message delivered by Guru Nanak. This was an explanation of deeper truth about human beings and God and the way to realize God in terms of the alphabet. The teacher stood abashed before the Divine Master and bowed to him. He then took him back to his father and said, Mehtaji, your son is an Avtar (prophet) and has come to redeem the victims of Kalyug (the age of Falsehood). He is destined to be a world Teacher, there is nothing that I can teach him.

Many writers believe that Guru Nanak was first sent to different schools belonging to the Hindus and Muslims to learn about Vedas (Hindu Scriptures) and Quran (Muslim Scripture), and only after obtaining the knowledge from those scriptures, he started his religion. According to Malcolm, Guru Nanak is said to have learnt all earthly scenes from Khizr -the Prophet Elias. There is a reason to believe, writes Cunningham, that in his youth he made himself familiar with the popular creeds both of Mohammadans and the Hindus and that he gained a general knowledge of the Quran and Brahmanical Shastras. 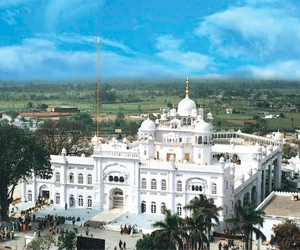 It seems that all these scholars of history have not grasped the basic fundamental fact about the divinity of Guru Nanak. He was born with divine status, thus, his teachings were heavenly. These writers seem to be very much ignorant of the fact that Guru Nanak was an Embodiment of Divine Light. He was a celestial being and his divine attributes put him above mankind and its schools. Historians have failed to visualize the splendor in Guru's Jot. Heavenly Spirit does not learn from man-made institutions. He was a heavenly messenger and a born world teacher who taught the mankind the path of righteousness and truth. Guru Nanak's divinity is above all earthly institutions and their teachings. The Message that Guru Nanak gave to this world, came to him direct from God as he confirms himself:

It is also mentioned in the Janamsakhi (biography) that many times Guru Nanak said to his companion Mardana, Mardana, play the rebec, the Divine Word is coming. This confirms the fact that education from the Hindu and Muslim religious institutions, had no bearing at all on the Divine Word that Guru Nanak received from God and delivered to this world. To say that Guru went to different institutions to learn, is violating the sanctity of Guruship.