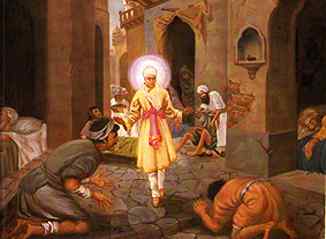 Guru Har Kishen who was the second and the youngest son of Guru Har Rai and Mata Krishan Kaur, was born on 7th of July, 1656 at Kiratpur. The reason why Ram Rai was superseded has already been given in the last chapter. Guru Har Kishen was appointed Guru when he was five years and three months old.

Ram Rai was at the Emperor's court in Delhi and when the news of Guru Har Kishen's succession to Guruship reached Ram Rai, he was inflamed with jealousy. The masand Gurdas who attended on Ram Rai comforted him," There is no need to be sad. Thou hast many disciples in this part of the country. Even the Emperor himself holdeth thee in honor." Ram Rai was not satisfied," Knowest thou not, when the Sikhs of this country learn that the Guruship hath been given to my younger brother, they will turn away from me and go to him." However Ram Rai acted on Gurdas's suggestion and sent his masands in every direction to proclaim his succession and bring him the offerings of the faithful. His masands went in all directions to announce his succession as Guru but the Sikhs who knew Guru's succession, refused to accept Ram Rai as their Guru. At that time Ram Rai decided to lay his case before the Emperor. Thus he addressed Aurangzeb,"Sir, my father has appointed my younger brother as successor to him, and now he has taken possession of his throne, his property and offerings. This misfortune has befallen me on account of my obedience to your Majesty. My father was opposed to you on that account, and at his death he ordered my younger brother never to be reconciled to you, and never to look upon your face. Now I pray thee to summon him to Delhi and order him to exhibit miracles as I have done."

This situation provided the Emperor with a good opportunity to realize his own religious mission. Aurangzeb wanted to convert all Hindus to Islam but he apprehended failure in Punjab because the people greatly revered the Guru there. If the Emperor could get Ram Rai the Guruship, and through him he would perhaps be able to spread Islamic faith in Punjab, or even if he were successful to set both brothers at variance, they would die by mutual slaughter, his purpose should be served.

Aurangzeb having contrived this wicked plan, called Raja Jai Singh of Amber (Japer) and ordered him to summon Guru Har Kishen and said," I wish to see him, be careful that he (Guru) be treated with all respect on his journey." Ram Rai was delighted to hear the Emperor's decision to summon his brother. 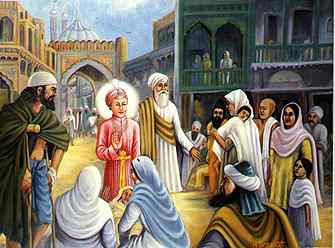 Many writers have shown their disbelief over the fact that Guru Har Kishen being a child, possessed high attainments and he taught with all the confidence to those who asked him about truth. Intelligentsia cannot understand the sanctity of Guruship as they attribute every happening to age, intelligence and experience of a person. It should be noted here that Guru Har Kishen because of his divine prerogatives, had the spiritual powers at the age of five. His spiritual attainments came with his status of Guruship. As has been explained before, in Sikh Holy Scripture Guru means Jot or Divine Light, once the Guruship is installed, then a person's age, intelligence or experience has no value. It is then the Divine Light that works in that person. The power of Divine Light is beyond the reach of human intelligence. The intelligentsia cannot perceive or apprehend the power of Divine Light through the media of their technical knowledge. Our so called technical knowledge or the intelligence, in reality is 'I-am-ness' or the veil of ego. God is everywhere and within us too, but this veil of ego separates us from Him and it hides the truth from us. According to Gurmat, human being as bride and God as bridegroom, live together but the veil of ego separates them. When by the grace of the perfect Guru, this veil of ego is broken, the bride meets the Beloved, God:

"Bride and the Bridegroom live together, but the screen of ego hangs in between;
When the perfect Guru breaks the veil of ego, O Nanak, we meet our Beloved, God." (Malar Mohalla 4, p-1263)
It is only the Guru's grace that opens up our inner eyes with which we can perceive the Incomprehensible and enter the stage of Eternal Bliss.
"Bisman bism bhaey bismad, Jin bujhaya tis aya swad."
(Gauri Sukhmani Mohalla 5, 16-8, p-285)
'Man wondereth at the wonders upon wonders of Creation But it is only he who knoweth God, who
obtaineth bliss.'
(Translation of the above) 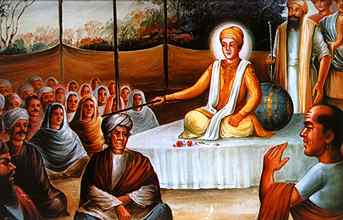 To reach that stage, a person first must seek Guru's grace. In order to do that, one must abandon the sense of egoism and the pride of technical knowledge; and then submit and surrender unconditionally before the Guru and beg for his grace. The answer to the question as to how the Guru at the age of five could possess attainments of such a high magnitude lies not in the reasoning of egoistic mind but in the spiritual vision. The answer to the spiritual power of the young Guru lies in the understanding that the Guru though human in body, is Divine in Spirit. Egoistic minds of the so called scholars prohibit them from understanding the Divinity of the Guru. As long as human mind remains under the intoxication of egoism, the cycle of arguments of intelligence will continue and a person can never perceive the power of Divine Light, cannot comprehend God and can have no knowledge of Him. The egoistic mind will then continue to wonder how a five years old Guru could perform those supernatural acts.

Raja Jai Singh had previously heard the Guru's praises and was, therefore, pleased at the prospect of making his acquaintance and of listening to his instruction. He sent his emissary to Kiratpur to request the Guru to come to Delhi. The Guru refused the invitation, for he had been forbidden by his father not to see the Emperor. Raja Jai Singh sent back this communication," Raja Jai Singh humbly requests the Guru to come to Delhi so that he and the Guru's Sikhs may behold him. The Guru may act as he pleases regarding an interview with the Emperor." It was made clear by the emissary of Jai Singh that he (Guru) would not be compelled to go to the Emperor.

The Guru set out from Kiratpur. On his way he waited for some Sikhs who had come to Kiratpur after his departure. Among them were the maimed and the leprous, all of whom he cured by the imposition of his hands. At Panjokhra, a village near Ambala, came a proud learned Brahman, who without even saluting the Guru, sat down in is presence. He then said," Thou who callest thyself Sri Har Kishen, must be greater than Lord Krishna. Translate the Gita for me." At that time, there stood nearby a dumb and illiterate man, Chhaju who hailed from the same village as the Brahman. Chhaju was serving water in the kitchen of the Guru where he had encamped. The Guru asked the Brahman whether he should translate Gita himself or he should get it done from Chhaju. The Brahman thought, Chhaju who could not even talk, how could he translate it? So he replied after a little pause, that Chhaju should do it. The Guru was always carrying a stick with him. He called Chhaju, put his stick on his head and asked him to answer the Brahman's questions. To the utter amazement of the Brahman, Chhaju explained in detail each and every verse that the Brahman asked. Upon this the Brahman fell on the lotus feet of the Guru and apologized for his indiscreet behavior.

When the Guru reached Delhi, he was received by Raja Jai Singh who came bare footed to meet the Guru. He requested the Guru to stay at his palace. That palace is now known as Gurudwara Bangla Sahib in New Delhi. Thousands of people of Delhi came to have 'darshan' (holy sight) of the Guru. The sick were healed and those in distress were comforted at the very sight of the holy Master. 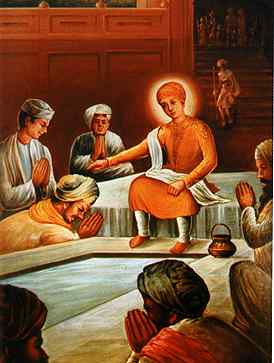 The Emperor sent presents at the arrival of the Guru and expressed a wish to see him but the invitation as refused. The Guru said," My elder brother, Ram Rai, is with the Emperor and he will transact all political affairs with His Majesty, and I better not meddle with him. My mission is to preach the true Name. Ram Rai bears enmity with me on account of Guruship, and if the Emperor shows any favor towards me , Ram Rai will become more hostile and grave dissensions in the family may better be avoided. For this and other reasons my father forbade me to meet the Emperor."

"If the True God dwell not in the heart,
What is eating, what is clothing,
What fruit, what clarified butter and sweet molasses, what fine flour and what meat?
What dresses, What a pleasant couch for billing and cooing,
What an army, what mace-bearers and servants, and what palaces to dwell in?
Nanak, except the true Name all things are perishable."
(Var Majh ki Mohalla 1, p-142)

On the instruction of Emperor Aurangzeb, Raja Jai Singh agreed to test the Guru whether he possessed any superhuman power. His head queen dressed like a maid servant and sat among other maid servants and queens. The Guru was requested to identify the head queen (Rani) which he immediately did. Upon this Raja Jai Singh and his queens acknowledged the Guru's spiritual power.

Cholera and small-pox were raging fiercely in Delhi at that time. The Guru ordered to spare all the offerings to reduce the suffering of the poor. The food, medicine and clothes were distributed among the poor and the sick. He won many followers in this way. 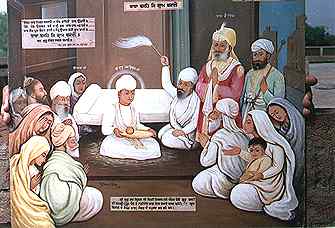 Shortly after the above occurrence, the Guru was seized with high fever which was followed by small-pox. His mother sat by him and pleaded," My son, why art thou intent on thy death? Thou hast only lately been seated on the Guru's throne, thou art still a child, and it is too soon for thee to depart." The Guru replied," Be not anxious. My safety is in His Will. He is the Reaper of His crop; it is His pleasure, and sometimes He reaps it while it is still green, half-green and sometimes when it is ripe. The Creator will do what is best."

The Guru was ill for several days. He knew his end had arrived and called for five paise and a coco-nut. He waved his hand three times in the air in token of circumambulating his successor and said," Baba Bakale," which meant that his successor would be found at village of Bakala. He then breathed his last on 30th of March, 1664. His body was cremated on the bank of river Jamna where now stands the Gurdwara Bala Sahib.

FN-2:It is said that small-pox was so rampant in Delhi that the Guru out of human compassion took the small-pox to himself and absolved the inhabitants of Delhi of it. Raja Jai Singh got a tank excavated. The Guru dipped his feet in the water of the tank and after that whosoever took bath with that water, was cured from small-pox.