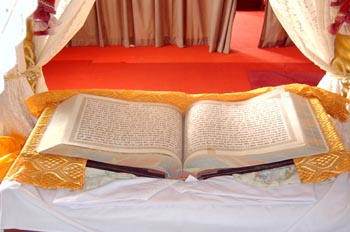 In Sikh religion the word 'Guru' is not denoted to its usual meaning such as a teacher or an expert or a guide or a human body, but this is composed of two words- GU and RU. GU means darkness and RU means Light i.e.Light that dispels all darkness is called JOT OR DIVINE LIGHT. When Impersonal God manifested His attributes in person, that person was called Guru Nanak:

Guru Nanak was thus the embodiment of Divine Light. 'In the true Guru (Nanak), He installed His Own Spirit, Through him, God revealed Himself.' (Asa di Var, pauri 6, page 466)

Guru Nanak seated Bhai Lehna (later called Guru Angad) on his throne, placed five paise and a coco-nut before him, and then bowed to him declaring him as GURU ANGAD. When Guruship was conferred on Guru Angad, he too became the embodiment of Divine Light.

'Jot uha jugat sai, seh kaya pher paltiae.'(Sata Balwand, p-966) 'The Divine Light was the same, The Way and Mode were the same, The Master had merely changed the body.' (Translation of the above)

The most important point to remember here is that the people bowed to Guru Angad ONLY when JOT was installed in him. No body bowed to him before the Guruship, which means the Sikhs did not bow to the human body (of Guru Angad) because human body was not Guru, but to the Divine Light which was passed on to that body by Guru Nanak.

The same process of conferring the Guruship continued till the tenh Guru. Then the tenth Master, Guru Gobind Singh seated the Adi Granth (the Holy Scripture- the Divine Word) on the throne of Guru Nanak, placed five paise and a coco- nut before it and then bowed declaring it as the Last Guru for ever. When the Guruship was passed on, Guru Granth Sahib too became the embodiment of Divine Light. It should, therefore, be remembered very clearly that bowing before Guru Granth Sahib as Sikhs do, is not a bowing before a book, but it is a bowing before the Divine Light or JOT (Guru) which was passed on when the Guruship was conferred upon it.

In Sikh religion the word 'Guru' has been used in three inter-related aspects:

Firstly it is used for God, the All-Pervading Divine Spirit, the Divine Light: 'The Guru is Beneficent, the Sanctuary of peace, The Guru is the Light of three worlds, He is the Eternal Being, O Nanak, he who believeth in Him, attaineth peace.' (Slok Mohalla 1, p-137) 'The Guru is All-Powerful, The Guru is the Formless Lord, The Guru is the Highest, Fathomless and Limitless, Ineffable is His praise; what can a sayer say?' (Sri Rag Mohalla 5, p-52) 'The Guru is Infinite God Himself Nanak, meditate upon such a Guru day and night.' (Asa Mohalla 5, p-387)

Secondly the word 'Guru' is also used for Guru Nanak as he was the Embodiment of God's Light:

Thirdly the word 'Guru' is used for Gurbani, the Divine Word. Since Gurbani came direct from God, and as there is no difference between God and His order (Divine Word), Gurbani is Guru too:

Guru Granth Sahib does not narrate the life story of Guru Nanak, but each and every word is dedicated to the Glory of the Almighty God only. It is not a reproduction of earlier religions, but the Divine Word (Gurbani) came to the Gurus direct from God. Guru Nanak stated that it was not his philosophy, it was not his understanding and it was not his thinking, but the Word was coming to him direct from God and he was simply delivering His message to the world. As he confirms:

This was repeatedly confirmed and emphasized by all the Gurus in their Bani such as:
'From God springs ambrosial Gurbani The exalted Guru narrates and preaches the same to world.' (Majh Mohalla 3, p-125) 'This Word comes from Him, Who hath created the World.' (Mohalla 4, p-306) 'This Word that hath come from God, It dispelleth all woes and worries.' (Sorath Mohalla 5, p-628) 'I speak but the Will of the Lord, For, the Lord's devotee narrateth the Word of the Lord.'(Sorath Mohalla 5, p-629) 'Whatever the Lord hath instructed me, Hear, O my brother.' (Tilang Mohalla 9, p-727)

The tenth Master, Guru Gobind Singh established the same truth that it was God's Word that was being revealed through the Gurus: 'Whatever the Lord sayeth to me I say the same to the world.' (Guru Gobind Singh)

The Janamsakhi (biography) reveals that Guru Nanak many times said to his minstrel Mardana, "Mardana, start playing the rebec, Gurbani (Divine Word) is coming." And the Divine Word was then recorded. That Divine Word is GURBANI- Guru Granth Sahib.

Guru Granth Sahib was not written by the devotees after the Gurus had gone, but it was dictated and compiled by the Gurus themselves. Thus it is the Authentic Divine Scripture. No body is allowed to change even a comma or a period out of 1430 pages. The seventh Guru's son, Ram Rai, changed the meaning of only one verse to please the Emperor, Aurangzeb, upon which he was excommunicated for ever by his father (the seventh Guru), thereby establishing the fact that no one could ever change the God's Word, the Gurbani.

Max Arthur Macauliffe, an English writer, delivered a speech in Punjabi language at Akal Bunga, Amritsar in 1899, the translation of which is:

"There is another point to the merit of the Sikh religion that the founders of other religions in this world never wrote even one line with their own hands. You might have heard that there was a very famous Greek philosopher called Pythagoras who had many followers, but he never left behind anything written by him from which we could have known about the principles of his sect. After him came the second Greek philosopher named Socrates who was born in 500 B.C. He became a very famous religious leader who claimed that he was receiving Divine instructions from God within himself, which persuaded him to do good and prohibited from doing any evil deeds. But he too never left anything behind written by him which could have shed light on his philosophy and its principles. Whatever we know about him, has only come through the writings of his follower, Plato. Besides there came Mahatma Buddh in India and he never wrote anything with his hands. After that came Christ who did not write anything himself. His teachings are only known through Bible. However the Sikh Gurus acted quite opposite to all these religious leaders that they themselves dictated their message of Truth and compiled Guru Granth Sahib. In that respect the Sikh religion is far ahead than others." (Translation Sri Guru Granth Sahib- pothi 1,p-gaga, by Bhai Vir Singh)

In Hindu mythology the word 'OM' always meant for God as monotheistic. Then they started interpreting it as more than one God. Guru Nanak put an integer '1' before it and a kar (a semi- circle) after it. Thus it becomes 'EK-OM-KAR' and by doing so, he sealed the position for ever meaning 'There is One and only One God'. Therefore Guru Granth Sahib uniquely begins with integer One ('1'). The One Absolute is the monotheistic conception of God and is represented by numerical symbol here. One God does not only mean numerically one but Unique without a second like Him.

Guru Granth Sahib begins with Mool-Mantar or the Preamble of Japji which is the Essence of the whole Guru Granth Sahib:
Ek-Onm-Kar Sat-Nam Karta-Purkh Nirbhao-Nirvair Akal-Murat Ajuni, Saibhang Gurparsad There is But One God He is the Eternal Truth The Creator, All-Pervading Divine Spirit Unfearful, Without hate and enmity Immortal Entity Unborn, Self-Existent Realized by His Own Grace (the Guru)

Guru Arjan Dev had accomplished a task by authenticating the diverse compositions and prepared the Adi Granth for the benefit of his followers. Since the work had remained where it was left, Guru Gobind Singh included in it the Bani of Guru Tegh Bahadur and put the seal of Finality on it. Subsequently this finalized version of the Adi Granth was invested with the Guruship by Guru Gobind Singh.

Guru Granth Sahib is the only refuge for a man tossed about in the furious ocean of worldly existence. It helps a person to live by certain directives or moral codes which are necessary for the achievement of salvation.

Man is the epitome of God's creation. This human body is attained after transmigrating through various lower species. Guru Granth Sahib advocates the excellence and utility of human life because it is through human form that a person can attain final emancipation. Man has great capacity for conscious awareness which helps him reach the desired spiritual goal. Therefore, all teachings and exhortations for spiritual enhancement are addressed to man in Guru Granth Sahib. Man's material values are listed as false, 'koor':

"False are kings, false their subjects, false the whole world; False are mansions, false palaces, false those who dwell therein; False is gold, false sliver, false he who weareth them; False husbands, false wives, they pine away and become dust. Man who is false, loveth what is false, and forgetteth the Creator. With whom contact friendship? The whole world passeth away. False is sweetness, false honey, in falsehood shiploads are drowned- Nanak humbly asserteth- Except Thee, O God, everything is thoroughly false." (Asa di Var- Slok Mohalla 1, p-468)

Guru Granth Sahib signifies the importance of Nam by identifying it with the Guru. Nam releases man from all his previous sins, sorrows, sufferings and cycle of birth and death. No rituals, no alms, no sacrifices, no fasts and no penances equal Nam.

Guru Granth Sahib initiates a disciple on the path of spiritual progress and guides him at the various stages of his journey to God. It is a ship that steers clear a devotee through the ocean of Maya (Materialism), thus, leading the human soul to its ultimate destination which is the Absolute Bliss.

"The fearful ocean of the world is dangerous and formidable; it hath no shore or limit, No boat, no raft, no pole, and no boatman; But the true Guru hath a vessel for the terrible ocean, and ferrieth over him on whom he looketh with favor." (Sri Rag Mohalla 1, p-59)

Guru Granth Sahib is completely authentic and is preserved in its original form. It is a highly valuable possession which Sikhs have received from God through Guru Nanak and is held in supreme reverence by them.