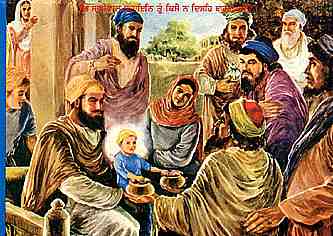 It may not be out of the way to say here that throughout the annals of human history, there was no other individual who could be of more inspiring personality than Guru Gobind Singh. At its climax the tenth Nanak infused the spirit of both the saintlihood and the undauntedness in the minds and hearts of his followers to fight oppression in order to restore justice, righteousness (Dharma) and to uplift the down-trodden people in this world. It is said that after the martyrdom of Guru Tegh Bahadur, the tenth Master declared that he would create such a Panth (nation) which would not be cowed down by tyrant rulers but it would rather challenge the oppressor in every walk of life to restore justice, equality and peace for mankind. He further resolved that he would feel worthy to be called Gobind Singh only when any single member of his Khalsa Panth would successfully and undauntedly challenge the army of one hundred and twenty-five thousand opponents in the field. This point was rightfully proven at Chamkaur Sahib when Sahibzada Ajit Singh (Guru's about 18 years old eldest son) challenged the Mughal forces and their allies, the hilly Rajas.

"The Divine Guru hath sent me for religion's sake On this account, I have come into the world; Extend the faith everywhere Seize and destroy the evil and sinful. Understand this, ye holymen, in your minds I assumed birth for the purpose of spreading the faith, saving the saints and extirpating all tyrants." (Guru Gobind Singh- Chaupai, Bachitar Natak)

Guru Tegh Bahadur's martyrdom symbolized in itself the resistance to the tyranny of Muslim rule in favor of a new society. When evil is holding its head high, should a holy man knuckle under it or take up arms to combat and destroy it? The young Guru, Gobind Rai, decided in favor of the latter course i.e. to combat evil and uphold righteousness. He thus enjoined upon his followers to make use of the sword if all other means failed to liquidate the wicked and his wickedness. In order to achieve this mission, he issued 'Hukamnamas' (circular letters of authority) to his followers to present to him arms of different designs. The Guru's orders were obeyed with great zeal and devotion. He himself wore uniform and bore arms and induced others to practise archery and musket- shooting. He encouraged various muscle-developing and strenuous sports as part of the program of physical culture. Many followers with martial instincts whose forefathers had served the Guru's father and his grandfather, flocked to him. His principal companions at that time were his aunt Bibi Viro's (Guru Har Gobind's daughter) five sons, Sango Shah, Jit Mal, Gopal Chand, Ganga Ram, Mohri Chand; his uncle Suraj Mal's two sons- Gulab Rai and Sham Das; his maternal uncle Kirpal Chand; Bhai Daya Ram, the friend from his youth; and Bhai Nand Chand, a favorite masand.

The Guru instructed his followers to lead a well-meaning and disciplined life. He according to the customs of his redecessors, used to rise early in the morning and perform his devotions. He was particularly delighted to listen to Asa di Var. After day-break, he gave divine instructions to his Sikhs and then practised martial exercises. In the afternoon, he received his followers, went shooting or raced horses; and ended the evening by performing the divine service of 'Rehras'.

The Guru's handsome exte rior was much admired both by men and women. A person called Bhikhia from Lahore came to visit him. Seeing the handsome young Guru, Bhai Bhikhia offered the alliance of his daughter Jito to him. The proposal was accepted and there were great rejoicing at Anandpur on the occasion of the betrothal ceremony. The twenty-third of Har, Sambat 1734 (1677 A.D.) was fixed for the marriage. The Guru sent orders in all directions for this occasion and the Sikhs thronged from various places including Lahore. A place was set up near Anandpur, which was called Guru ki Lahore where the marriage ceremony took place.

Surging crowds of people with their hearts filled with love and devotion to the Master, thronged to see him.Some came from Kabul, Qandhar, Gazni, Balkh and Bukhara. They brought several priceless gifts- rugs, carpets, shawls and other valuables when they came to pay homage to their Lord. Duni Chand, one of the devotees, visited Anandpur in 1681 and presented to the Guru a woolen tent, 'Shamiana' or a royal canopy which surpassed in excellence. It was embroidered in gold and silver studded with pearls. It is said that its splendor surpassed that of the Emperor's canopy.

Through the grace of Guru Tegh Bahadur, Raja Ram of Assam was blessed with a son, Rattan Rai. Raja wanted to take his son to the Guru but he died soon and could not visit Anandpur. His last injunction to his Rani (wife) was that the prince should be brought up as a devout Sikh. The Rani faithfully carried out the behests of her husband and imparted the knowledge of the lives and teachings of the Gurus to the growing prince. When Rattan Rai, the prince, attained the age of twelve, he felt an inclination to see the Guru. Accordingly he with his mother and several of his ministers proceeded to Anandpur. He brought with him an offering of five horses with golden trappings, a very small elephant, and a weapon out of which five sorts of arms could be made, a pistol, a sword, a lance, a dagger, and a club.

The Raja was accorded a great reception. He offered his presents and prayed to the Guru to grant him the Sikh faith. He was granted all his desires. The Raja exhibited the traits of his presents. He caused the elephant to wipe Guru's shoes and placed them in order for him. At the word of command the animal took a chauri and waved it over the Guru. The Raja requested the Guru never to let the elephant out of his possession.

The prince and his party remained at Anandpur for five months and during this time, he enjoyed kirtan and Felt uplifted by the Guru's sermons. At the time of departure, the Guru accompanied them to some distanceand then bade them good-bye. They were sent off with presents. Besides these tangible gifts, the Guru gave Rattan Rai a RATTAN - a jewel of Nam, which was the ultimate gift of life:

"Nam is the priceless Jewel that the perfect Guru hath;
If one dedicates oneself in love to the True Guru,
He lights in one's heart the Light of Wisdom, and Nam is then revealed.
Blessed is the fortunate one who goeth to meet the Guru." (Sri Rag Mohalla 4, p-40) 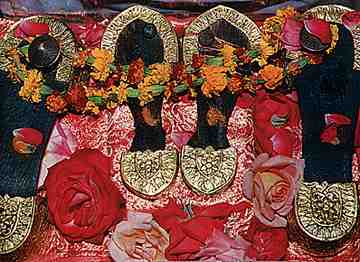 The Guru's army was swelling day by day and he was now set for the construction of a big beating drum which was deemed necessary to enthuse his army and without which he considered his equipment was incomplete. The work of the drum was entrusted to his Dewan, Nand Chand. In those days, only an independent chieftain was to use such a drum within the limits of his territory. The beating of the drum within the bounds of another chief's domain was an hostile act and meant an open invitation of war. The completion of the big drum which was called Ranjit Nagara, or victorious drum on the battle- field, was celebrated with prayers and the distribution of Parshad (sacred food). When it was beaten, the men and women of the city came to behold it and there were great rejoicing.

The Guru and his men went for hunting the same day and when they reached near Bilaspur, the capital of Kahlur, the drum was beaten and it sounded like a thunder to the hillmen who became apprehensive of some danger. Raja Bhim Chand of Kahlur consulted his prime minister who advised him that it was the Guru's drum who was worthy of worship, secondly, he maintained a large army and was greatly feared; and thirdly the Guru was brave, and such men were sometimes useful as allies. On hearing this Raja Bhim Chand desired to meet the Guru and despatched his prime minister to arrange for an interview which was granted. The Raja accordingly went with his courtiers to Anandpur.