Guru Arjan was born in Goindwal, a small town in Amritsar district, on April 15, 1563. He was the youngest son of Guru Ram Das and Bibi Bhani. As a child, one day he found his way to the bed of Guru Amar Das who was then resting. His mother ran to fetch the child before he could disturb the Guru, but he had already awakened the Guru, who revealed,"Let him come to me; 'yeh mera dohita bani ka bohita howega'- this grandson of mine shall be a ship to take mankind across the ocean of the world." Guru Arjan was married to Ganga, daughter of Krishen Chand, a resident of Meo village near Phillor in Jullundhur district. The marriage took place in 1589 when he was about 26 years old. Guru Ram Das began excavation of two tanks named Santokhsar and Amritsar and started the foundation of the city of Ramdaspur. After his father, Guru Arjan applied himself to the task of completing the tanks and extending the city. It was his practice to go every day and superintend the work.

Guru Nanak during his missionary tours had established Sangats at the various places throughout the country. The connection with the center was kept up by the constant visits of the Sikhs to the Guru. During Guru Amar Das's time the missionary work became more regular and methodical. He divided the Sikh spiritual kingdom into twenty-two Manjis. Guru Ram Das established the nucleus of a new order of missionaries called Masands. The word Masand seems to have come from 'Mas Nad' which is shorter form of 'Masnedi-Ali' or His Excellency, the title which the Mughal Governors often held. The purpose of this organization was to spread the Sikh faith at a rapid pace and also to collect money for the construction of tanks and the city of Ramdaspur. Guru Arjan organized Masand system afresh. He appointed new Masands of integrity and sincerity to look after the secular as well as spiritual affairs of the Sikhs. Masands were required to collect Daswandh (one-tenth of income) from the Sikhs which was then contributed towards the Guru's treasury (Golak) for the maintenance of the Sikh temples. Some writers are of the opinion that Daswandh was raised under compulsion. Daswandh was never raised under any pressure nor it was considered 'a tax'. Whatever the Sikhs contributed or are contributing even today, is totally out of free will, love and devotion.

Masands were required to pay annual visits to Amritsar at the Baisakhi fair to receive instructions from the Guru and to hand over the amount of Daswandh collected. Regular accounts of these offerings were kept and receipts were issued. Apart from financial duties, Masands were vigorous preachers. For the ceremony of initiation the ideal Charanamrit was the one administered by the Guru himself. Since it was not possible for the Guru to be present physically everywhere, the authority was delegated to the local missionaries to enrol new members of the Sikh Sangat by administering Charanamrit prepared by themselves in the prescribed manner. It attracted a large number of converts. During the time of Guru Arjan, there was hardly any place in India where the Sikhs were not found. Masands worked very hard to propagate Sikhism in every corner of the country./p> 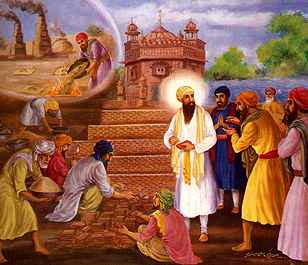 Guru Arjan completed the unfinished work of excavation of tanks- Santokhsar and Amritsar. Bhai Buddha being the most trustworthy disciple, was appointed to supervise the work of construction. Santokhsar was completed in 1587-89. Having completed the tank of nectar, the Guru laid down the foundation of Hari Mandar which is now called Golden Temple, in the center of the tank. It is said that the Sikhs represented to the Guru that Hari Mandar should be the tallest building in the neighborhood. The Guru explained,"Hari Mandar should be the lowest because what is humble, shall be exalted. The more a tree is covered with fruit, the more its branches descend to the earth."

Mian Mir, a famous Muslim saint, was a friend and a devotee of the Guru. The Guru asked Mian Mir to lay the foundation stone of Hari Mandar. Thus, Mian Mir laid the brick in January, 1589. The head mason moved the brick to place it in order. Whereupon the Guru prophesied that since the brick was moved by the mason, the foundation of the temple would be laid again in the coming times. His words were subsequently fulfilled as Ahmad Shah Abdali destroyed the temple and desecrated the tank in 1763. However two years later, the great army of the Khalsa recovered possession of the temple, relaid its foundation and reconstructed it. Hindu temples were closed on three sides and their entrances were generally towards the east while Muslim mosques had entrances towards the west. Hari Mandar, the holy Sikh temple had entrance on all four sides. This denotes that God was in all the directions; and secondly four doors in the four directions (east, west, north and south) meant that all the four castes would have equal access to the temple. Whereas the Hindu temples were only open to the chosen classes, the Golden temple was open to all who would seek God. Muslim mosques were open only to Muslim men, the Golden temple was open equally to all men, women and children, irrespective of caste, creed, race, color, sex, religion or nationality. The Adi Granth, Sikh holy Scripture, was placed in the center of the temple.

When the construction of the tank and the temple was completed, Guru Arjan uttered the following Sabad in joy and gratitude: "The Creator stood in the midst of the work, And not a hair of any man's head was touched. The Guru maketh my ablution successful. And by repeating God's Name, sins shall depart. saints, Ramdas tank is beautiful, He who batheth in it shall save himself and the souls of his family. The whole world shall congratulate him, And he shall obtain the reward his heart desireth. He who while meditating on his God Cometh to bathe here shall be made safe and whole. He who batheth in the saints' tank Shall obtain final salvation. Meditating on God's Name, He shall not suffer transmigration. He to whom God is merciful Knoweth divine knowledge. His cares and anxieties shall depart Who seeketh the protection of Baba Nanak and God." (Sorath Mohalla 5, p-623)

NOTE: It should be pointed out here that bathing alone in the tank of Golden Temple cannot give the desired salvation. The above Sabad should not be taken for any pilgrimage of rituals. It does not mean a mere journey to holy place. Sikh faith rejects all ceremonial acts. In fact there are two tanks in Amritsar- outer tank and inner tank. First one is the outer tank full of water. It is customary for a Sikh to take bath every morning- to clean and purify his body before going in the 'presence of God', that is meditation. Thus outer tank in Amritsar serves that purpose. A Sikh's mission does not complete here. Guru Amar Das confirms this:

'If mind is sinful, everything is sinful,
By washing the body, mind will not become pure.'
(Wadhans Mohalla 3, p-558)
Then there is the inner tank called Hari Mandar. That tank is 'Gurbani'- Guru Granth Sahib which is full of 'Praise and Prayer'- NAM. After washing outerself in the outer tank, a Sikh goes to the inner tank to cleanse his sinful mind in the tank of Nam. That is what Guru Nanak calls pilgrimage:
"Pilgrimage is Nam"
(Dhanasri Mohalla 1 Chhant, p-687)
Without Nam immersing in water countless times, will not deliver salvation. This process of cleansing sinful mind in the inner tank of Nam is the pre-requisite for spiritual growth. It leads to graduation to spiritual consciousness- a breakthrough to Eternal illumination. After cleaning his inner and outer-self, a Sikh realizes the glory of Nam and enters a stage of eternal bliss, and thereby merges with the Eternal Being. A body is dead without life, and life itself is dead without Nam.
What is then Amritsar?
Then there was no sign of the city of Amritsar, Guru Nanak asked his disciples to bathe in 'Amritsar':
"Bikhia mal jai amritsar navo Gur santokh paya."
(Maru Mohalla 1, p-1043)
'All sins are washed away by bathing in Amritsar And by Guru's grace, contentment is obtained.'

(Translation of the above)
"Gur sagar amritsar, jo echhai so phal pai." (Maru Mohalla 1, p-1011-12) 'Divine Word (Gurbani) is Amritsar Whosoever batheth in it, will get his desire fulfilled.'

(Translation of the above) "Untar nirmal amritsar nai." (Asa Mohalla 3, p-363) 'Impurities of mind are washed away by bathing in Amritsar.'

(Translation of the above)
All the above verses of Guru Nanak and Guru Amar Das give reference of 'Amritsar' when there was no trace of the city or the tank of Amritsar. That means that Amritsar actually and literally means Tank of Nectar which is Gurbani, the Divine Word. Thus pilgrimage of Amritsar means the pilgrimage of one's mind in the Divine Word, the NAM. Without Nam, bathing hundreds of times cannot purge mind of its impurities and therefore salvation cannot be achieved: "Mal haumai dhoti kivai na uterai je sau tirath nai."
(Sri Rag Mohalla 3, p-39)
The Guru says that without Nam, all other acts to attain salvation, are futile:
"Nam bina phokat sabh karma jiun bajigar bharm bhulai."
(Parbhati Mohalla 1, p-1343)
'Without Nam, all acts are futile As an actor's role in drama, maketh him not real.' (Translation of the above) 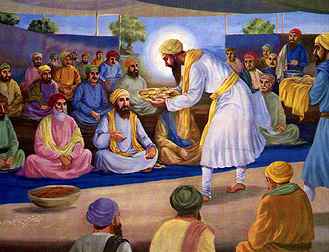 When the tank and the temple were completed, there were great rejoicing. The enormous exertions and sacrifices were made by the Sikhs. The Guru honored all those Sikhs who had put in dedicated service to ensure the completion of the projects. Eminent among those people were: Bhai Buddha, Bhai Bhagtu, Bhai Bahla, Bhai Kalyana, Bhai Ajab, Bhai Ajaib, Bhai Umar Shah, Bhai Sangho, Bhai Salho and Bhai Jetha. Bhai Buddha was made incharge of the Hari Mandar. Bhai Bhagtu was instructed to preach Sikh doctrine in the Malwa region and Bhai Salho was made the superintendent of the city to look after its development. City of Ramdaspur was, in the course of time, called Amritsar. Because of Guru's residence and the central place of worship, Amritsar became the center of the Sikh activities.