Guru Angad Dev was born on March 31, 1504 in a village called Harike in Ferozepur district of the Punjab. His father, Bhai Pheru was a trader. His parents called him Lehna. He was married at the age of fifteen. His wife, Khivi was a native of Mattei di Sarai in Ferozepur district. His father grew weary of Harike and with his family returned to his ancestral place, Mattei di Sarai and lived there. Bhai Lehna's wife gave birth to two daughters, Amro and Anokhi, and two sons called Dasu and Datu.

When Mattei di Sarai was sacked by the Mughals and Baloches, Bhai Lehna and his father moved to Khadur, now a famous town near Tarn Taran. Bhai Lehna grew very religious under the influence of his mother, Daya Kaur, and became a devotee of Durga, the goddess of Shakti. He used to organize yearly pilgrimage of devout Hindus to Jawalamukhi, a place of Durga temple in the lower Himalayas where fire issued from the mountains. He used to lead Durga dance around the fire in a harness of jingling bells.

Bhai Jodha, a Guru's Sikh, lived in Khadur and it was his daily routine to rise early very morning and recite Japji and Asa di Var. One day as Bhai Lehna attentively listened the Divine Sabad recited by Bhai Jodha, his mind obtained peace. After the day break he asked Jodha who had composed that stimulating hymn. Bhai Jodha then told him all about Guru Nanak, who was living at Kartarpur at that time. The touch of divine Sabad made such an impact on Bhai Lehna's mind that he got impatient to meet the Guru. When he was on his annual pilgrimage to Jawalamukhi, he broke his journey at Kartarpur to offer his obeisance to the Guru.

Guru Angad being bestowed with Guruship by Guru Nanak 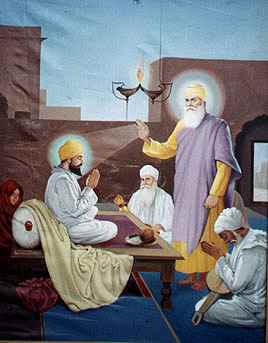 During his meeting, the Guru spoke to him of the True Creator, leaving such an mpression on Bhai Lehna that he threw away the jingling bells, which he was carrying with him to dance before the goddess. He had obtained such a peace of mind that he decided to discontinue his pilgrimage and abide with the Guru. On seeing his ncreasing devotion, the Guru said to him one day that he should go home and settle his affairs and on his return he would initiate him as his Sikh. Upon this Bhai Lehna returned to Khadur for some time.

A detailed account has been given in the last chapter regarding the circumstances which led to his succession to Guruship. One day as Sikhs assembled, Guru Nanak seated Bhai Lehna on his throne, put five paise and a coco-nut in front of him and bowed before him and then said to Bhai Buddha,"This is my successor- Guru Angad; put a tilak on his forehead in token of his appointment to the Guruship." Bhai Buddha did so. The Guru then ordered his followers to obey and serve Guru Angad; who was in his own image. Bhai Gurdas describes the succession to Guru Angad (Var 1, pauri-45): "Angad got the same tilak, the same umbrella over his head, and was seated on the same true throne as Guru Nanak. The seal of Guru Nanak's hand entered Guru Angad's, and proclaimed his sovereignty." After his appointment to the Guruship, Guru Nanak directed Guru Angad to return to Khadur. Upon this Guru Angad returned to Khadur and lived there.

The Guru sat in a room locked from outside near Khadur, and meditated on God without ny distraction or interruption. He did not eat or drink anything except a pot of milk daily. About six months passed like this and the Sikhs did not know the whereabouts of the Guru. One day Bhai Lalo, Bhai Saido and Bhai Ajita and other Sikhs came to Bhai Buddha and asked him the whereabouts of the Guru.They had searched Khadur and other places but could not find him anywhere. It is said that Bhai Buddha concentrated his thoughts on the Guru and was able to visualize his place of meditation. Next morning they all went to the house near Khadur where the Guru was sitting in seclusion. The owner of the house gave them no information but went inside the house and told the Guru about the visit of four Sikhs. The Guru told the owner that they should be shown inside. He embraced Bhai Buddha and uttered the following Slok:

"Cut off the head which boweth not to the Lord, Nanak, take and burn the
wretched body which feeleth not the pain of separation." (Slok Mohalla 2, p-89)

Bhai Buddha requested him to take his seat as Guru and receive the Sikhs publicly. fter this Guru Angad came forth from his seclusion. When the Guru came out, crowds went to see him and presented to him their offerings. Whatever he received, the Guru passed on to his kitchen. There were continuous preaching, singing of hymns and repetition of Name.

EMPEROR HUMAYUN COMES TO THE GURU 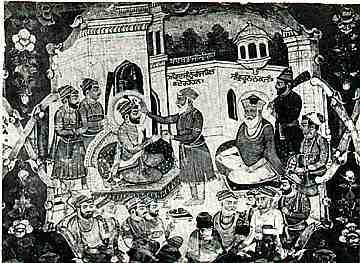 Emperor Humayun succeeded his father Baber but he was badly defeated by Sher Shah. umayun inquired for some saint who could help him regain his throne and kingdom. He was advised to seek assistance of Guru Angad. Upon this Humayun came to Khadur. At that time the Guru was in a trance and the minstrels were singing the hymns. The Emperor was kept standing unattended. Humayun felt offended and in moment of rage, he put his hand on the hilt of his sword with the intention of striking the Guru. The word, however, did not come out of the sheath which gave Humayun time to repent his act. Upon this the Guru addressed to him,

"Where was your sword when you were facing Sher Shah? Now when you have come amongst the priests, instead of saluting them respectfully, you want to draw your sword on them. In a cowardly manner you fled from the battle ground, now posing as a hero you wish to attack the priests engaged in their devotion."

Humayun repented and begged for Guru's spiritual assistance. The Gurureplied,"Hadst thou not put thy hand on the hilt of thy sword, thou shouldst at once obtained thy kingdom. Thou shalt now proceed for a time to thine own country, and when thou returnest thou shalt recover thy kingdom." Humayun went back to his country and having obtained a reinforcement of cavalry from the king of Persia, he returned to India. After fighting a pitched battle he recovered